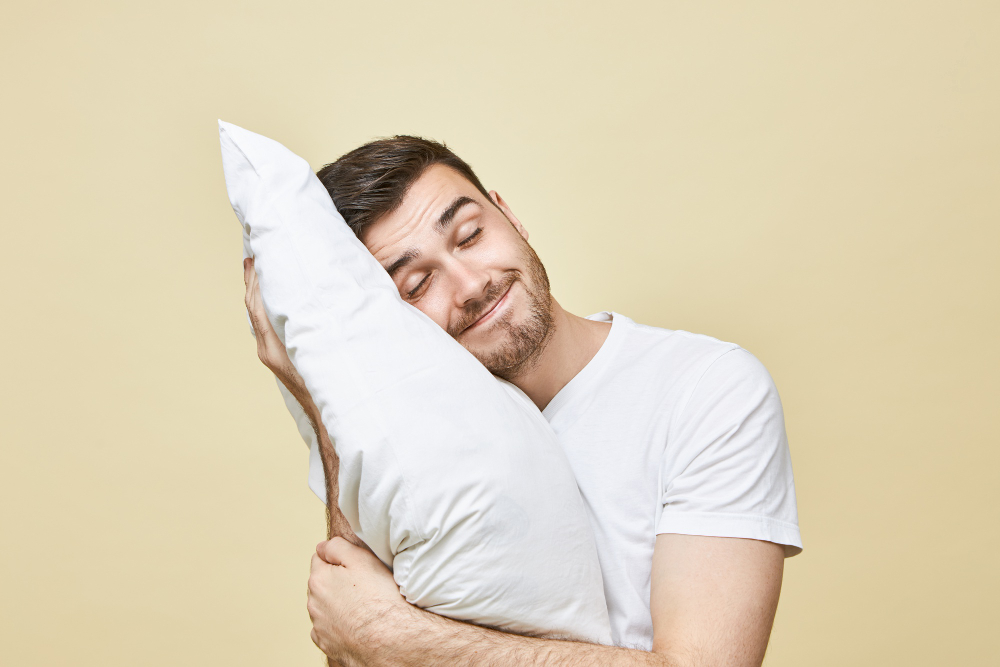 Sleep is a complex phenomenon constituted by two types of sleep patterns: non-REM (also  called Slow Wave Sleep) and REM. In an ideal sleep pattern, a person experiences stages of  sleep in non-REM and REMphases.SlowWaveSleep(non-REM)presentsas a high voltage slow  wave electroencephalographic pattern (alpha and delta waves), while REM sleep exhibits a low voltage fast wave pattern (theta wave) accompanied by eye movement. If either phase is  disrupted, or sleep disturbance results. Although stages of sleep accompanied by calming  brainwave activity is the natural circadian rhythm, 70% of American adultsreportthatthey obtain insufficient sleep at least one night a month, and 11% report insufficient sleep every  night. It is estimated that sleep-related problems affect 50 to 70 million Americans of all ages and socioeconomic classes. Because sleep deprivation is linked to increased health risk,  sleeplessness has become a public health concern.

At the root of impaired sleep quality may be a number of underlying issues. Neurochemical  balance is key to achieving optimal sleep patterns. However, the following may be contributing  to a neurochemical imbalance:

Anxiety can be an instigator for sleepless nights and seems to be the result of an imbalance in  neurotransmitter (GABA, serotonin and dopamine) function. Excess glutamate, the main  excitatory neurotransmitter in the brain, results in low gamma-aminobutyric acid (GABA),  essential for limiting the excitation of neurotransmitters and fundamental for good-quality  sleep.

Electromagnetic fields and blue light also play a roleindecreasedmelatoninproduction, necessary for normalsleep cycles. Stress, common to 79% of all Americans, can yield excess  cortisol or insufficient cortisol production, both of which tip the hormonal balance to  wakefulness in the night.

Although each person’s neurochemistry is unique, Alpha-Theta Ultra PM™ is a somnotropic  formula that incorporates key nutrients recognized to induce calming brainwave activity and  promote the onset and duration of high-quality sleep for most people by supporting GABA  receptor function, and healthy levels of serotonin and dopamine.

L-theanine (γ-glutamylethylamide) is an amino acid found in green tea. A derivative of glutamic  acid, it is one of the most important neurotransmitters.

Fat-soluble, it is easily absorbed and crosses the blood-brain barrier resulting in increased  dopamine and GABA levels in the brain, and increased production of calming brain alpha waves. L-theanine has been shown to support improved sleep quality not by sedation but  through anxiolysis.

There is some evidence L-theanine offers neuroprotective benefits partly due to the  antagonistic action of theanine on glutamate subtype aMPA and kainite receptors. By acting on the glutamine (Gln)transporter, itinhibitsthe incorporation of extracellular Gln into neurons,  suppressing the conversion of glutamine to glutamate by glutaminase. This antagonistic activity  plays a role in neuroprotection against glutamate toxicity.

In one study where subjects were given L-theanine and a placebo and exposed to stressors to  test cortisol levels, the salivary cortisol response was significantly reduced in the subjects taking  L-theanine when compared to the placebo.

Inanotherstudy, L-theanineintakeresulted in a reduction in heartrate (HR) and salivary  immunoglobulin A (s-IgA) responses to acute stress relative to the placebo due to its effect on  the sympathetic nervous system. Overall, L-theanine hasbeenshowntocause“anti-stress effects”viathe inhibition of cortical neuron excitation.

L-theanine has been found to significantly increase activity in the alpha frequency band, which  is associated with relaxing the mind.

BDNF plays a centralrole in neural development and cellsurvival and is essentialto the molecular  mechanisms ofsynaptic plasticity. In one study, L-theanine was found to increase expression of

BDNF protein in the hippocampus due to its antagonistic action on theNMDA receptor, oneof thethreeglutamatereceptors. Therefore,

L-theanine has been positively associate with BDNF, a protein that increases neural plasticity  and promotes neurogenesis (dopaminergicand serotonergic).

When evaluating L-theanine’s effect on sleep quality, one study looked at boys diagnosed with  ADHD and found higher sleep percentage and sleep efficiency scores, compared to those in the  placebo group.

BaikalSkullcap(ImprovesOverallSleepQuality) Scutellaria baicalensis Georgi, or Chinese skullcap,  has been widely used for its health-supporting propertiesfor thousands of yearsin China. Flavones such as baicalin, wogonoside and their aglycones baicalein wogonin are the major  bioactive compounds extracted from the root of S. baicalensis. Baicalin reports anxiolytic effects by acting on the GABA(A)receptorsite and exertsthis effect through the alpha2- and alpha3- containing subtypes. In addition, the neuroprotective effects of S. baicalensis have been studied  using both in vitro and in vivo models yielding positive results.

Lemon balmis a perennial herbaceous plant in the mint family that has been shown to improve sleep quality.22Inastudyof childrenwithsleepbruxism, Lemon Balm was administered, with  and without Phytolacca decandra. A significant reduction of sleep bruxism was observed using  the Visual Analogic Scale, demonstrating increased calmness during sleep. In another study,  Lemon Balm increased self-ratings of calmness and alertness, mitigating the effects ofstress, often the source of sleeplessness. These findings are also consistent with the German Commission E recommendations regarding the approval of Melissa officinalis L. extract use for  nervous insomnia.

Passionflower (Passiflora caerulea) Passiflora caerulea, also known as blue passionflower, is one ofthe most vigorous and tender members the passionflower genus Passiflora. Native to  South America, its traditional use has been as an anxiolytic. According to the American  Botanical Council, the components of thefruit andflowerthat confertherapeuticbenefits  include maltol, coumarin derivatives, flavonoids (vitexin), and small amounts of essential oils.

Much of the evidence supports the anxiolytic and sedative effects of Passiflora caerulea are due  to its high chrysin content. Another animal study demonstrated that the combined aqueous  extract of Melissa officinalis and Passiflora caerulea reduced plasma corticosterone, the most  important biomarker associated with stress.

5-HTP is the intermediate metabolite in the biosynthesis of serotonin. L-theanine, tryptophan and  5-hydroxytryptophan (5-HTP) all are reported to promote relaxation by acting as GABA receptor  agonists, thereby boosting GABA levels. In animals,5-HTPisdecarboxylatedtoformserotonin,  whichistheneither acetylatedtoN-acetylserotonin or it is methylated to form

Melatonin functions in the regulation of sleep, modulation of circadian rhythms and enhancement of immunity, while retaining its ability to reduce oxidative stress by processes  that are, in part, receptor-independent. This multifunctional hormone mediates the body’s  response to light availability and signals its production intimes of darkness to prepare for sleep.  Production of melatonin decreases with age, which contributes to sleep difficulties associated  with aging.

Vitamin B6 is a cofactor in the tryptophan- serotonin pathway.When using 5-HTP to enhance  serotonin andmelatonin production,the activated form of vitamin B6 helpsto catalyze the conversion of 5-HTP to serotonin.