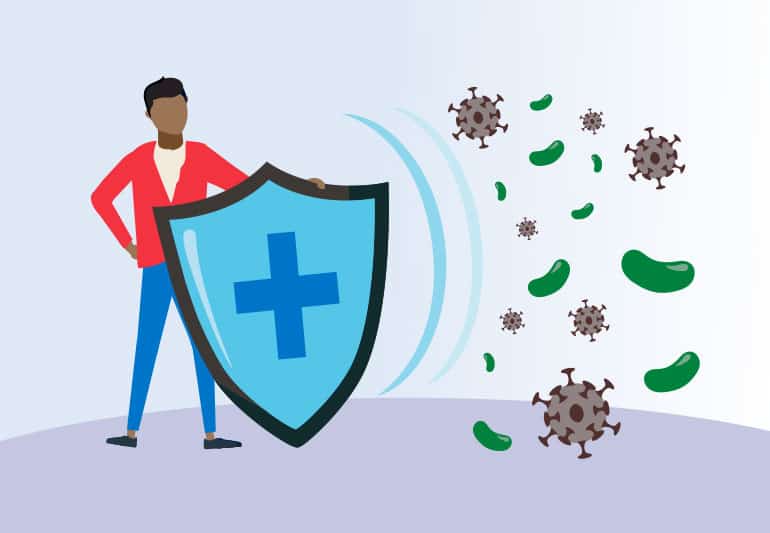 The idea behind vaccines is to confer immunity to a specific virus. But doesn’t it make sense to take steps to improve general immunity. We hear that half of Europe died during the Bubonic Plague in the 14th century. That means that the other half didn’t die—better immunity.

We use language like, “I caught a cold,” or “I caught the flu”. It makes it sound like the virus has moves like LeBron James. It fakes left, spins right and slam dunks into you. But we know that even in a pandemic, not everyone gets sick.

The one solution that most people seek out is the flu shot. Many people get a flu shot and think to themselves, “Mission accomplished–I am ready for flu season.” The vaccination is the only thing they do to protect themselves. Doesn’t it make sense to take steps to improve the general health of the immune system and to help it to fight off any bacteria or virus?

Enhance your immune system as much as possible. Do all the things your mother told you: wash your hands before eating, eat a good diet, and get plenty of rest.  Diet, lifestyle and keeping stress to a minimum can all help you avoid getting sick during cold and flu season. There are also a number of supplements that can help enhance immunity.

Bio-C Plus 1000™, for example, is a powerful antioxidant and helps the body to fight off viruses. Bio-Ae-Mulsion Forte® helps to protect the mucus membranes of the sinuses and the respiratory system.

But you should not just randomly take supplements–everyone has individual needs. The supplements only enhance the immune system when there is a need for them. They don’t “fix” the immune system as much as they fix a vitamin deficiency. Taking Bio-C Plus 1000™ and Bio-Ae-Mulsion are often successful because vitamins A and C are often depleted when the body is fighting a cold or virus.

You have already heard about washing your hands, getting plenty of rest, vitamin C and Echinacea, but there are some other things you can do that may not be as familiar.

Probiotics: A double-blind, placebo-controlled study appearing in the journal Pediatrics (2009; 124(2): e172-9) Found that probiotics provided the test group with a 53% lower incidence of fever (for the single strain) and 73% reduction for the group taking the combination probiotic. Probiotics also reduced other cold and flu symptoms including coughing and runny nose. The group taking the supplement also missed fewer days from day care, 32% fewer days. Antibiotic use was also less; 68% less in the single strain group and 84% less in the combination group. Children’s ENT-Pro™ is a pleasant-tasting strawberry-flavored probiotic lozenge that supplies newly isolated Lactobacillus delbrueckii LE and Lactobacillus rhamnosus LB3 strains, along with Lactobacillus plantarum LM, Bifidobacterium longum and Bifidobacterium bifidum, combined to support otolaryngeal health in children.

Eat breakfast: Subjects who had more than one illness during the study were less likely to eat breakfast and more likely to drink alcohol. Those who developed more than

one illness also tended to have negative, stressful events over the preceding year.

Bio-D-Mulsion Forte®: Some scientists think that part of the reason for flu season is the short days—less sunlight and vitamin D.

Watch your diet: Sugar and refined flour products stress the immune system. Similarly, hydrogenated oils and deep-fried foods should be avoided. Fresh, brightly colored produce will help to boost your immune system. Fresh produce is high in vitamin C. The bright color in plant foods is from carotenes and bioflavonoids. These are powerful antioxidants that will help to protect your cells. The carotenes are precursors to vitamin A, an important immune vitamin.

A Guide to the Immune System