Asthma and What You Eat 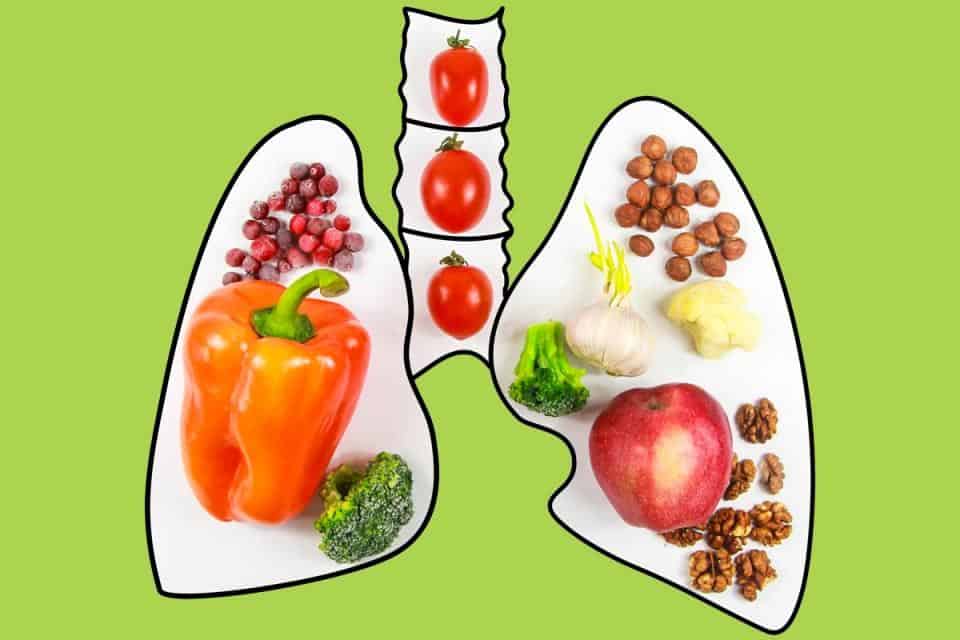 If the eyes are a window to the soul, then the lungs are a door to the body—providing a gateway for the arrival of oxygen to every living cell.

Fitness pros know that regular exercise trains the lungs to inhale more oxygen and exhale more carbon dioxide, improving lung capacity and strength. But can eating better make the lungs healthier, too? Though we have much more to learn, the research is promising. Multiple studies provide strong indications that eating certain foods can reverse some lung conditions and may stall the progression of others—or at least improve their symptoms.

Of course, eating right has no adverse side effects. It also benefits other body systems, so focusing on nutrition for lung health is a win-win. Let’s see what research says about the effects of diet on asthma.

Asthma and What You Eat

Asthma is a chronic condition that narrows the lungs’ airways, inhibiting air flow and causing coughing and shortness of breath (NHLBI n.d.b). Asthma’s exact cause is unknown, but many triggers can cause muscles along the air tubes to tighten and swell. Mucus production may also increase, further narrowing the breathing passages.

People with asthma typically use a mix of medications (such as inhaled corticosteroids) for both long-term control and quick relief from acute symptoms. Some people’s asthma is so severe that they need hospitalization to restore normal breathing.

Tree pollens, air pollution and certain chemical smells can trigger asthmatic responses, as can some animal fur and even exercise. But so can certain foods, such as milk and cheese. For some people with asthma, removing food triggers can work as well as—or better than—taking a medication (NHLBI n.d.b).

“I had an asthmatic patient who was a 27-year-old pharmacy student,” recalls Houston-based Bandana Chawla, MD, who is board certified in internal and lifestyle medicine. “She came in for an appointment and told me that she had gone vegan, had given up dairy, stopped her allergy shots and was no longer using her inhalers.

“I was disappointed and skeptical that this would help her. As I was writing that the patient had been noncompliant with meds in her chart, my assistant was measuring her lung capacity with a spirometry pulmonary function test. To my surprise, her spirometry numbers were improved compared to when she had been managed through medications. I later had a few other patients come in claiming to have cured their asthma by giving up dairy. This led me to review the research, and I ended up going from vegetarian to plant-based, giving up dairy. I also found that I was able to get off the nasal steroids that I had been taking for my own allergies.”

In 2005, an Australian research review didn’t find a definitive connection between dairy and asthma (Wüthrich et al. 2005). But a study in the Journal of Asthma found that subjects with asthma experienced a decline in their pulmonary diffusing capacity for 3 hours after drinking 16 ounces of whole milk (Haas et al. 1991). One research review in the journal Medical Hypotheses found that a milk component called beta-CM-7 could stimulate mucus production in the respiratory tracts of patients with actively inflamed tissues, potentially explaining why eliminating dairy then improved symptoms (Bartley & McGlashan 2010).

Another study experimented with administering a vegan diet—all plant foods and no dairy—to 35 patients who had suffered from asthma an average of 12 years and managed it with medications. Of those who stuck to the eating plan, 71% reported asthma improvement within 4 months. Within 12 months, 92% reported improvement, and there were positive changes in clinical biomarkers such as vital capacity, forced expiratory volume (FEV1, a measure of lung function) and a number of biochemical blood markers (Lindahl et al. 1985).

“I’ve had a number of patients with severe asthma and allergies who, when they switched to eating a plant-based diet, had a resolution of their symptoms,” says Roy Artal, MD, faculty member of the Cedars-Sinai Medical Center Women’s Guild Lung Institute Center of Excellence in Los Angeles and board certified in pulmonology, sleep disorders and internal medicine. “The mechanisms are not entirely understood, but when a patient is looking to avoid being on an inhaled corticosteroid, another option is going on an anti-inflammatory diet, which would be a whole-food, plant-based diet.”

Whole plant foods such as vegetables, fruit, whole grains, legumes, nuts and seeds are high in antioxidants and other phytochemicals that are anti-inflammatory. One study found that ex-smokers who ate more antioxidant-rich apples, bananas and tomatoes over 10 years had a slower decline in their FEV1 than those who ate the smallest quantities of these foods (Garcia-Larsen et al. 2017). The fiber in plant foods may also play a role: One study associated low fiber intake with reduced measures of lung function and an increased prevalence of airway restriction (Hanson et al. 2016). Fiber in plant-based diets feeds the “good” bacteria in the gut microbiome, which then produce anti-inflammatory compounds that can boost immunities and dampen inflammation throughout the body.