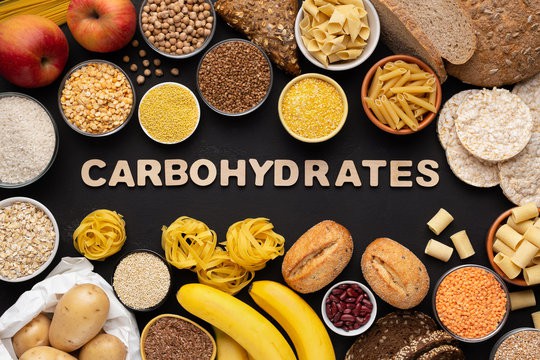 Providing carbohydrates in conjunction with exercise is not a new concept. In 1887, Montague Shearman stated, ‘‘Going into training was taken to mean the commencement of a peculiar diet of half-cooked beefsteaks and dry bread and the reduction of the daily drink to a minimum, and not to imply the beginning of the proper training or cultivation of the muscles required for a race,” (26). Early work from Bergström et al. and also Hermansen et al. demonstrated strong associations between muscle glycogen depletion and impaired muscle function during exercise at moderate to high intensities in humans (4,19). Fast-forward years later with accumulated data that carbohydrate intake is of great particular importance for acute athletic performance in both endurance and resistance training (16,28,31,32,33,35). It should be noted here that carbohydrate intake includes carbohydrates consumed before, during, and after high-volume exercise (35).

To fully understand the role of carbohydrates on exercise performance, the key underlying physiologic components must be understood first. For instance, as an athlete starts to ramp up to higher and higher exercise intensities, there is a shift in fuel substrates from fat at lower intensity via aerobic metabolism to the use of more carbohydrates at higher intensities via increased anaerobic metabolism (30,33). This was first formally coined by Brooks and Mercier in 1994 as the “crossover effect,” (5). This is a gradual transition as the exercise intensity is increased —more like a dimmer switch on a light than a hard on/off switch. To add more complexity, researchers have shown that even at the same moderate to low exercise intensities, different athletes use a different “fuel mix” with some using more fat and others using more carbohydrates (15,18,27).

Another key component is that carbohydrate storage is much more limited compared to fat. Carbohydrates are mainly stored in the body in the form of glycogen in the liver and the muscles (Table 1). The amount of blood glucose is comparatively tiny, at less than one teaspoon. Blood glucose in healthy subjects is tightly controlled, whereas liver and muscle glycogen can vary widely depending on nutrition, exercise type, and exercise duration performed.

Table 1. Stored Carbohydrates in the Liver, Muscles, and Blood

Muscles and the liver play key roles during rest and exercise. The liver has the ability to take other substrates such as lactate, amino acids, and glycerol (from the breakdown of triglycerides) and convert them into glucose (i.e., gluconeogenesis). This process is especially critical in times of prolonged fasting or intense exercise

For example, the contribution of gluconeogenesis to liver glucose production accounts for almost half of glucose production in healthy subjects at the end of a 42-hour fast (1). Muscle glycogen, on the other hand, does not decrease during periods of fasting, unless direct muscular work is performed (14,3

Muscles and the liver play key roles during rest and exercise. The liver has the ability to take other substrates such as lactate, amino acids, and glycerol (from the breakdown of triglycerides) and convert them into glucose (i.e., gluconeogenesis). This process is especially critical in times of prolonged fasting or intense exercise

For example, the contribution of gluconeogenesis to liver glucose production accounts for almost half of glucose production in healthy subjects at the end of a 42-hour fast (1). Muscle glycogen, on the other hand, does not decrease during periods of fasting, unless direct muscular work is performed (14,34,36).

No Carbohydrates and Performance Effects

It seems logical to assume that since carbohydrates enhance exercise performance especially as the intensity is increased, then the opposite condition would be true where the removal of carbohydrates as a fuel should then severely reduce exercise performance. To that end, studies where glycogen depletion was undertaken and then further work was performed do show that performance declined (4,19). The downside of glycogen depletion studies is the massive amount of muscular work or very high intensity of exercise that is needed to be performed to deplete glycogen, which imparts a high level of fatigue before the next exercise session is performed.

Because of the flaw of accumulated fatigue in depletion studies, is there another line of data where glycogen is either not present or its use is impaired that could provide insights? McArdle’s disease is a rare genetic disorder where the glycogen phosphorylase that breaks down glycogen into glucose subunits to be used as fuel, is missing (12). When these subjects with McArdle’s disease are tested at higher exercise intensities, massive impairments in exercise performance and higher than normal muscular pain are reported (13). In this worst-case scenario when carbohydrates cannot be effectively used as fuel, exercise performance is severely impaired.

Once it has been established that carbohydrates are essential for more intense exercise, the next logical question is, how much carbohydrates are needed? The early work in this area was done over five decades ago with the invention of the needle biopsy technique that allowed a sample of fresh muscle tissue to be extracted and analyzed for glycogen content (3). This spurred further research into the concept of glycogen supercompensation that typically employed very high levels of exercise and intensity in conjunction with various amounts of carbohydrates during the week leading up to an endurance event. A landmark study in the early 1980s found similar magnitudes of performance increases but employed a much less severe protocol since it did not involve the exhaustive exercise and carbohydrate restriction phase (31). Sherman et al. found a carbohydrate intake of 5 g/kg of body mass for several days followed up by an even higher intake at 8 g/ kg body mass for three days produced similar effects compared to the more extreme glycogen supercompensation methods originally performed (20,31). More recent work from Burke et al. has recommended carbohydrate intake ranges of 5 – 7 g/kg/day for general training needs and 7 – 12 g/kg/day for the increased needs of endurance athletes when performing intense physical exercise of 2 – 3 hours daily (6,7). This was found to be similar to that recommended by the International Society of Sports Nutrition (ISSN) who recommend athletes and active individuals consume a diet high in carbohydrates of 5 – 8 g/kg/day to maintain muscle and liver carbohydrate stores (23).

A caveat is that many athletes, especially females, tend to under eat despite reporting “best practices” of carbohydrate intake (17). This was supported by data from Masson et al., where many non-eliete endurance athletes did not meet the curent recommendations for carbohydrates (25). Baranauskas et al. found that 81% of endurance athletes consumed lower than recommended amounts of carbohydrates in their diet (2). Specially, female athletes were low in carbohydrates, dietary fiber, protein, omega-3 fatty acids, and micronutrients (2). While carbohydrate intake is important for exercise performance and is typically low, close adherence to total caloric intake must still be examined.

Once a baseline of carbohydrates is established, if prolonged (greater than 60 – 120 min) exercise is to be performed, the addition of carbohydrates during exercise has been shown to enhance performance (8,16,23,28,32,35). A recent study investigated the maximal ergogenic (performance enhancing) amount of carbohydrates required during a simulated race (time trial) (24). Ten trained (average VO2max of 61.2 ml/kg/min) males took part in a double-blind, randomized trial over five occasions at 77% VO₂max for two hours, followed by a 30-min time-trial (TT). During the time trial portion, they ingested five different types of carbohydrates of varying amounts/types ranging 60 to 112.5 g/hour. They concluded that 90 g/hr of a 50/50 mixture of glucose and fructose was best for cycling TT performance. A meta-analysis conducted by Pöchmüller M et al. in 2014 of 16 randomized controlled trials on trained cyclists (mean VO2max between 50 – 71 ml/kg bodyweight/min) found a benefit to ingesting carbohydrates in a concentration range of 6 – 8% just before and/or while exercising longer than 90 min (28). Thus, providing data that the amount and concentration do, in fact, matter. The American Dietetic Association, Dietitians of Canada, and the American College of Sports Medicine recommended that for endurance events up to 1 – 2.5 hr fueling during the race with carbohydrates at 60 g/hr and for races over 2.5 hours going up to 90 g/hr (16,29,35). A potential downside is the risk of gastrointestinal distress increases sharply at around 60 g/hr, especially when only single-carbohydrate sources are ingested. This effect may be mode dependent as running and strength exercises result in increased intra-abdominal pressure and organs bouncing that exasperate (GI) issues (9,11,22).

In summary, carbohydrates are an effective ergogenic aid for endurance exercise performance, especially as the length of exercise time increases. A baseline daily nutrition intake of around 5 – 8 g/kg/day or up to 7 – 12 g/kg/day in the most extreme cases appears to be sufficient. Consumption of carbohydrates during longer exercise bouts may also be ergogenic with amounts up to 90 g/hour during cycling performance using a mixture of glucose and fructose being beneficial. These guidelines need to be tested in practice with each athlete as the amounts may be different, especially in endurance exercises, such as running, where GI issues are more common.

25. Masson, G, and Lamarche, B. Many non-elite multisport endurance athletes do not meet sports nutrition recommendations for carbohydrates. Applied Physiology, Nutrition, and Metabolism 41(7): 728-734, 2016.