In Type 2 Diabetes, Metabolic Control Could Add Years to Life 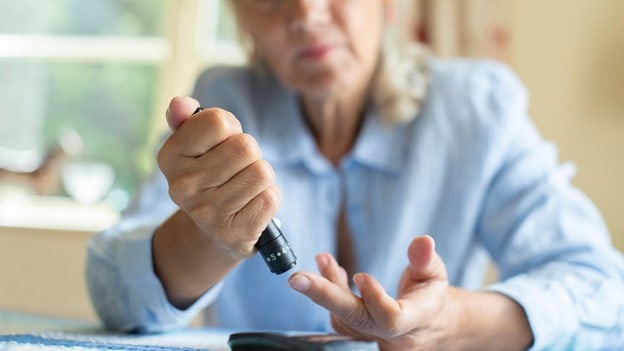 People with diabetes who hit treatment goals for metabolic measures tacked years onto their life expectancy, a modeling study suggested.

Among 421 individuals with type 2 diabetes, those who started in the highest quartile for hemoglobin A1c (averaging 9.9%) and reduced their level down to a normal level (average HbA1c 5.9%) were able to add on 3.8 years to their life expectancy, reported Hui Shao, MD, PhD, of the University of Florida in Gainesville, and colleagues.

Individuals with the highest HbA1c levels who were able to reduce their levels down to the third quartile (an average of 7.7%) had a 3.4-life year gain, the group wrote in JAMA Network Open.

Though not as dramatic, patients who were able to reduce their HbA1c from an average of 7.7% down to 6.8% (the second quartile) still added half a year to their life expectancy.

However, those who cut their HbA1c level from 6.8% down to 5.9% (the first quartile) didn’t seem to add any years to their life.

Hitting other metabolic goals also appeared to tack on years to life expectancy for these individuals, as well. As for BMI, those in the lowest three quartiles for average BMI saw several life years gained when compared with those in the highest quartile who had an average BMI of 41.4 (severe obesity):

“Our findings can be used by clinicians and patients in selecting optimal treatment goals, to motivate patients in achieving them, and to measure potential health benefits for interventions and programs to improve diabetes care in the U.S.,” Shao’s group recommended.

This message is especially true for younger patients with type 2 diabetes, as the benefits of biomarker control were most pronounced in this age group, Shao’s group pointed out. The magnitude of life expectancy benefits appeared to diminish for older patients and varied slightly according to sex.

“However, for a male patient aged 70 to 80 with the same levels of biomarkers, reducing BMI to 30 kg/m2 was only associated with an additional 0.6 years of LE,” they wrote.

For this decision analytical model, the researchers utilized the Building, Relating, Assessing, and Validating Outcomes (BRAVO) diabetes microsimulation model that drew upon data of adults with type 2 diabetes from the 2015-2016 cycle of the National Health and Nutrition Examination Survey. This data was then compared with short-term mortality data from the National Death Index. The average age of the participants was 65.6, and 46% were women.

One limitation to the analysis was that end-stage kidney disease was not included as a variable in the BRAVO model, which could possibly overestimate life expectancy, Shao’s group said. Other limitations were lack of inclusion of other biomarkers like triglycerides and exclusion of type 2 diabetes patients with a history of cardiovascular disease.

Kristen Monaco is a staff writer, focusing on endocrinology, psychiatry, and nephrology news.