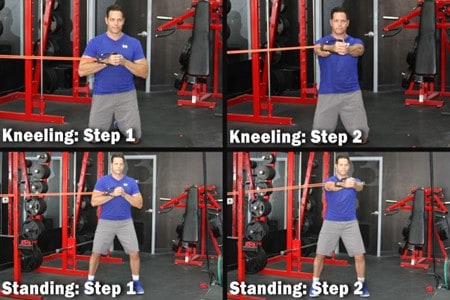 When you watch someone hit a golf ball, throw a punch or simply retrieve groceries from the car, it’s evident that human movement occurs in all three planes of motion. Did you know that 87.5% of our core muscles are oriented either diagonally or horizontally? One action that these muscles perform is rotation (Santana 2000). The diagonal muscle orientation is proof positive that the human body is designed to rotate.

This article explores how to train anti-rotation and rotation, why that’s important for daily life and sports, and how to safely and effectively train a client through a basic rotational progression.

The core’s function is not simply for forward bending, as in traditional sit-ups. One main function of the core is to stabilize the spine and pelvis in a neutral zone, which enhances power transfer and reduces shear loading on the spinal disks (Colston 2012).

Research supports this concept by stating that core musculature is organized similarly to an architectural tensegrity model (McGill 2007). Think of an army tent with guy wires. The weight of the canvas provides some stability through compressive loading, but the main stability comes from the lateral guy wires that come off the frame in a 360-degree fashion, providing tensile loads. McGill proposes that core muscles function in a similar way, originating from and inserting at angles on the spine, pelvis and ribs. This “human guy-wire system,” when functioning properly, provides spinal stability through both compressive and tensile loads. The core’s guy-wire system not only reduces injuries by stabilizing the spine but also stores elastic energy for tasks that involve force production.

The analogy of firing a cannon from a canoe comes to mind when considering the importance of core stability. One of the best examples of the core’s function in stability comes from research done by Juan Carlos Santana and team, in which they compared kinetic and electromyographic metrics for a standing cable press versus a traditional bench press (Santana, Vera-Garcia & McGill 2007). They found that individuals could bench-press only half of their body weight while standing, and when they failed during a standing press, core stability (or lack of it) was the limiting factor. Simply put, this indicates that stiffening the torso causes “power generated at the hips [to be] transmitted more effectively by the core” (McGill 2010).

Where does a trainer start if core stability is a limiting factor in power transfer and, at some point, transverse-plane loading needs to be introduced? McGill suggests beginning with three exercises that are excellent for preventing lower-back pain or for introducing people to a core performance program (McGill 2007).

Modified curl-up, side plank and bird dog are known as the “the big three”—a perfect starting trio for most people (below). Once you are proficient in McGill’s ground-based big three, it’s time to progress to “the standing big three.” Although there can be many steps between ground-based core drills and standing versions, the Pallof press, cylinder rotation, and horizontal chop with lead-leg step present a logical progression.

Human movement is a complex interplay of all three cardinal planes of motion, and rotational training should not be an afterthought. Regardless of fitness level or goals, you must understand the importance of transverse-plane movement to help maximize performance and reach your goals. Once you understand the mechanics of motion in the lower back, mid back and hips, you’re ready to include rotational movements and, as appropriate, to start progressing from the big three to the standing big three. You now have a simple-to-follow transverse-plane exercise series to incorporate into your foundational movement training—a series that will enhance functional outcomes for your clients.

Stuart McGill, PhD, a leading researcher and core performance expert, advocates using movements he calls “the big three.” They offer a great starting point for most clients wanting to “bulletproof” the core and protect the lower back from injury.

This is a gold-standard lateral stabilization move that will light up the core.

This tri-planar exercise adds a transverse-plane component to the sagittal-plane modified curl-up and the frontal-plane side plank. When done properly, bird dog is surprisingly difficult because it poses balance and postural challenges.

This kneeling or standing torsional buttressing task is named after the physical therapist John Pallof, who pioneered the move (Gentilcore 2018). The exercise is a great way to introduce transverse-plane loads that require a bracing core contraction with minimal movement of the upper extremities. The kneeling position takes the legs out of the movement and further challenges the core.

Once you have built up strength and endurance and can proficiently do anti-rotation in the transverse plane with the Pallof press, you can introduce cylinder rotation, a move that also mobilizes the hips, ankles, and feet. In this exercise, the client rotates through the hips while maintaining a neutral spine. The move is designed to “groove” hip rotation while limiting twisting in the lumbar spine, which “reduces the intrinsic strength of the disc annulus” (McGill 2007). Ideally, the torso rotates on top of the hips in the same way a cylinder rotates on a countertop: The top and bottom of the cylinder accelerate at the same speed and travel the same distance while the countertop remains stable.

A similar movement occurs as the shoulders, spine and pelvis accelerate at the same speed and travel the same distance on top of the hip joints. The rear-leg gluteus maximus fires hard to assist with external rotation as the front hip goes into internal rotation. Meanwhile, the rear foot goes into a pronated position, and the lead foot drives into supination.

You may feel slightly robotic at this point in the progression. However, once the anti-rotation basics have been mastered, it’s time to up the fun factor. The last move of this progression is more athletic and focuses on fluidity and power. If you’ve watched athletes throw, strike or serve, you know they don’t move like cylinders. There’s some disassociation between the shoulders and pelvis, which places a diagonal stretch on the oblique sling system. Witness this yourself by standing in front of a mirror wearing a loosely fitted shirt. Cock your throwing arm behind you as if preparing to throw overhead. Notice how the shirt wrinkles in a diagonal pattern, starting from your throwing shoulder to the opposite pelvis. The wrinkling demonstrates a stretching of the fabric—not dissimilar to what is happening to the muscles underneath. This “pre-stretch,” often referred to as the stretch-shortening cycle, stores potential kinetic energy so it can later be released explosively.

Athletes rely on the stretch-shortening concept to increase explosive power in all types of sports (Chu 2011). The anti-rotation pre-stretch also happens in many daily tasks, such as throwing luggage into the trunk of a car. Capitalize on this stretch-shortening cycle by adding a lead-leg step to the previous drill to perform the horizontal chop with lead-leg step.

Note: This move is designed to be a dynamic exercise performed at speed, yet it is imperative that the client start slowly, integrate the movement pattern, and build explosiveness over time.