Make Mine a Murasaki 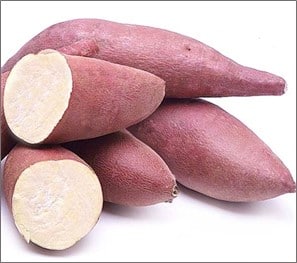 I must admit I didn’t think that was possible, but my friend and fellow Wellness Forum Institute student, Jodi, showed me otherwise. As it turns out these are darn fine tasting potatoes. Aside from being ridiculously high in good stuff and absolutely devoid of bad stuff, they have a pretty interesting story behind them…

A Japanese name, with Louisiana roots, grown in California

First off, the word “Murasaki” means purple in Japanese, although in this case it is a red-based purple vs. the Okinawa’s that are blue-based. As for the Louisiana component, these potatoes are an intentional, if not international, cross of a few different breeds, with at least one of those indeed coming from Japan.

Now for some things I never would have guessed in a million years – There is an entity called “The Sweet Potato Research Station”. It was established in 1949 (!) as part of Louisiana State University. In the early 2000’s a professor there, one Donald La Bonte, “fathered” Murasaki #1, giving a face to this potato. It was patented and then released to growers in 2008, with the proceeds from its seeds sales going back into the aforementioned Sweet Potato Research Station.

In a fit of irony, despite I am sure Professor LaBonte’s best efforts, the Murasaki does not do well in Louisiana. Maybe it is the moisture there, because it does just fine in California…

Sweet, but not too sweet, so less than a yam (the orange-y things). Some describe the taste as nutty or even chestnut-like. The texture meanwhile is creamy, though still firm. This makes them perfect for grilling (more on that below).

Nutritionally, while they don’t have the antioxidant punch of an Okinawa sweet potato, they are not bad in that regard (and of course they blow away an order of McDonald’s fries).  Lots of Vitamin A, with a good amount of potassium, vitamin C and that thing we can never get enough of – fiber. Top them off with iron in its non-heme form[1], calcium and a handful of amino acids. So overall it packs a pretty healthy punch.

One way or another it is a two-step process, but neither step requires much attention. First you need to cook them. Jodi uses an Instant Pot and so completes step one in just 8 minutes. I take the long road and steam them for my phase one. That path takes about 30 minutes.

For Jodi’s step two, she cuts them in half lengthwise and then grills them facedown until they no longer stick. I take the “easy road” after cutting them, and simply bake in the oven. I set the oven at 350oF and when it hits that point, I shut off the oven, let them cool there and then remove.

Either way, the edges get a tad caramelized with a hint of crunch and…even a touch sweeter.  Easy to batch cook them and then refrigerate what is not immediately consumed. I suggest a quick reheat (nuke for 30 seconds) when ready for subsequent servings.

My daughter thinks they are so good, she frequently takes them to school for lunch! That really is quite the testimonial.

Best place to bag a bag of Murasaki’s – TRADER JOE’S!

I have read Murasaki’s are seasonal (summer andfall), but I bought the bag above this week at TJ’s (deep February) so the seasonality issue appears to have been overcome, likely thanks to the resourcefulness of the good professor. The price was around $3.99 for the entire 3-pound bag, so definitely on the affordable side, and far less expensive than the Okinawa’s which tend to run close to that price for ONE pound.

In general, I like where TJ’s head is at, but this time they left me scratching mine. The printing on the left side of the label details some serving suggestions. Among them are:

“…or grate them into a hash with sausage and peppers…”

[1] That’s the form we need it in that let’s our bodies absorb exactly what we need at the moment. The heme variety which comes from animals is not so “flexible or understanding”.