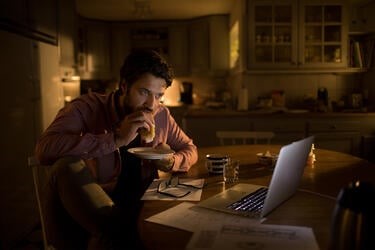 The results of a randomized crossover trial were recently published in Diabetes Care, describing the effects of either an early or late “meal” on glucose tolerance. Nearly 900 Spanish adults (that normally have dinner later in the evening) had two oral glucose tolerance tests (OGTT, 2-hour); one conducted 4 hours prior to habitual dinnertime, designed to mimic an early dinner, and the second performed only 1 hour before dinnertime (on a separate day), simulating the usual dinnertime.

The late versus early dinner was associated with a 3.5-fold increase in melatonin serum levels. Additionally, late dinner timing resulted in a 6.7% lower insulin area under the curve (AUC) and an 8.3% higher glucose AUC. Among participants with the G allele of the MTNR1B gene (the melatonin receptor-1b gene encodes the protein MT2, one of two melatonin receptor types that mediate the effects of melatonin, G allele present in ~1/2 of this cohort), the impairment to glucose tolerance with “later eating” was even stronger. This allele has previously been associated with an increase in risk for diabetes and impaired fasting glycemia, and this study attributed the impaired glucose tolerance observed with “later eating” to insulin secretion defects.

A previous systematic review found that melatonin supplementation did not change fasting glucose significantly. This study, however, suggests that a high carbohydrate meal near bedtime may impair glucose levels, particularly among those with the high-risk variant in the melatonin receptor, and that eating further away from bedtime may be desirable, particularly among those at risk.