Thru a Zen lens: Another way to look at cancer (Part II) 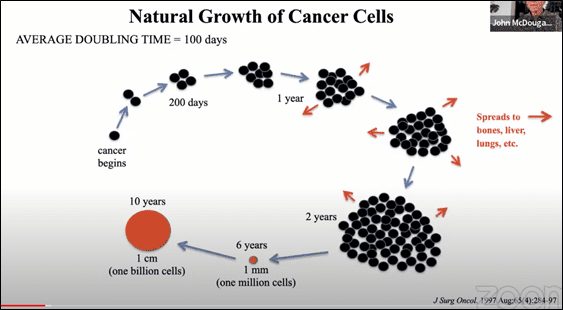 A theory: What to do about it…before, during…and after

It’s worth repeating several times): An ounce of prevention is worth a pound ton of cure

If ever there was a disease that is far better off being prevented than treated, cancer is it.[1] Once it has officially reared its head things are much tougher – Not impossible per se, but clearly fourth down and long yardage type stuff.

While there are exceptions, I’ll quote Hippocrates[2], the widely acknowledged “father of medicine”, for the first of two times in this Zen:

All disease begins in the gut.

Once we realize this, the path to prevention is clear: What we eat gets us in; what we eat can therefore get us out. While it would be wonderful if this simplism was always true, it isn’t. There are “complicating” factors. Two in particular:

* Once cancer cells have started growing somewhere, it is likely they have spread elsewhere, probably lots of elsewheres. The vast majority of the time this is no big deal. Our bodies are well-equipped to handle this in short order, safely containing them (via capsule / tumor) or simply outright destroying them.[3] The problem comes when we handicap our immune system’s ability to do this. How to prevent that is kind of the purpose of last week’s and this week’s Zen articles…

From Dr. McDougall, once again, a pretty telling diagram:

This is why if you can head it off at the pass, so to speak, you are way ahead of the game. How to do that: Diet is #1. It is necessary, but not necessarily sufficient. The diet I am speaking of, of course, is a whole food, plant-based one. There are, however, other lifestyle issues of importance:

If you are not doing any of these, tomorrow would be a good time to start…

Ok, so that’s the “before cancer” part – Now for the “during” part

Diet can be a slow-acting poison and, likewise it can also be a slow-acting healer. The commonality here is “slow-acting”. Sometimes, you don’t have that time. In effect, with cancer one can be in a “live today to fight tomorrow” situation AND that is where the big three of modern medicine have a place (surgery, chemotherapy, radiation). One needs to be aware, though, these are not meant to be forever treatments. What I read from people I give credence to, is to use them for a finite amount of time and then stop. Bring them back if and when the cancer returns. As anyone who has had any of these will testify, they are brutal therapies. There is nothing fun about them.

A great relevant line from T. Colin Campbell (The China Study / The Future of Nutrition):

“How did we come to regard poison as a tool in the pursuit of health?”

How I spent my summer vacation, two summers ago

…and how this ties into our topic. To finish my nutrition degree program, I had to complete a research project. The subject was to examine and comment on sixteen alternative cancer treatments. It took nine weeks, eight hours a day, five days a week…and over 100 pages of writing (typing). My general conclusion – the vast majority of them were nothing more than snake oil in the twentieth / twenty-first century. Their creators / promoters were lucky they weren’t in prison or tarred and feathered in another age.

A few of them, though, did appear to have benefit as adjuncts to an ongoing WFPB protocol and the targeted, temporary / as needed big three:

A fourth is part of something bigger which we’ll talk about in a minute. But first I would like to sidebar back to the AARP article on the war on cancer I referenced last week in Part I of this two-part Zen. Imbedded in the article was a list of nine things you could do to fight your own war on cancer (with my comments, naturally):

So overall, outside of the one absolute clunker (milk), not a bad list, but…nowhere do they mention the true heavy-hitter obvious ones to me: consume a WFPB diet, cut out meat, eliminate oil, minimize highly processed foods, and lay low on the fats). Oh well.

Now returning to that something bigger I mentioned above. There is this landmark book on cancer survival:

The author investigated and confirmed over 1,000 instances of people who experienced radical cancer remission. She identified 75 different survival strategies. Nine were common to ALL:

(Five thru nine are more or less also on my list)

And lastly, the “after cancer” part

Let’s set the stage with the other quote from Hippocrates:

“Natural forces within us are the true healers of disease.”

When it comes to keeping the cancer wolves at bay, something I said last week bears repeating:

“You can’t cure what you are still causing to create.”

The takeaway from this is simple: If you want to maximize the odds of minimizing the return of cancer, you can’t keep doing or going back to the things that likely played a big part in what got you there in the first place. Hopefully not surprisingly by now, número uno on my list is what you eat, specifically maintaining a whole food, plant-based diet.

To further hammer home the point of all this, the goal is to both weaken cancer and strengthen our immune system so it has a fighting chance. In a fair fight, it will win, and cancer will lose.

[1] A T. Colin Campbell quote: “In principle, there are few chronic diseases that are more easily preventable than cancer.”

[3] According to Dr. Pam Popper, we have over 100 genes devoted expressly to this task!

[4] Broccoli, Brussels sprouts, cabbage, kale, cauliflower, others. There are over 4,000 of them! The word comes from the cross-like appearance of their flowers. I think lightly steamed is best.

All Posts »
PrevPreviousHow to Maintain Your Fitness When the Cold Weather Keeps You Inside
NextHouse of Cards: Diffusing Domestic Tension in the PandemicNext